The Foundation in the News

Publication on the Government Gazette 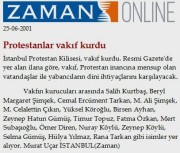 The day after the the publication of the Constitutional Document of the Istanbul Protestant Church Foundation in the Government Gazette, dated June 25 2001, the national press highlighted the news because it was the first evangelical entity to receive this achievement. Some simply reproduced the text of the GG, while others added a series of alarmist comments citing an alleged international plot behind the document. 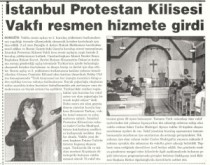 "The Istanbul Protestant Church Foundation has officially started its functions"

The first news of the Foundation in the Turkish press on 27 November 2001: an article on the occasion of the 2nd anniversary celebration of the Foundation and the 1st of its building, attended by several authorities, as well as congratulatory messages from President of the Republic, the Prime Minister and the Deputy Prime Ministers of the country which were publicly read.

The IPCF officially recognized as church

ISTANBUL - A new Christian church has opened in Istanbul for the first time in modern Turkey in what its founder hailed on Friday as a sign of increased religious freedom in the EU candidate country.

Since the foundation of the Turkish Republic in 1923 as a secular state with a predominantly Muslim population, accompanied by a mass exodus of Greek and Armenian Christians, many churches and other non-Muslim religious buildings have closed or been abandoned.

Minority rights are one of several sticking points in negotiations with the European Union, and the continuing closure of a Greek Orthodox seminary has become a symbol of the difficulties still to be overcome.

Barcelona-born Carlos Madrigal, the founder pastor of Istanbul's Evangelical church, sees the end of his seven-year struggle to make the church official as a major step for Turkey.

"As far as the Protestant Church is concerned, it's an achievement ... but in terms of the rights and freedoms of all citizens, a door has been opened for any community," he told Reuters at the church on the Asian side of Istanbul.

﻿He described the labyrinthine and expensive process required to get his church legally registered, including two trips to Turkey's top court.

Before 2003 it was impossible to open a church in Turkey, as Turkish legislation made no mention of the necessary procedures and dealt only with mosques, and worship outside an official venue was forbidden.

European Union-inspired reforms in 2003 changed that, but even so, it took a further three years of bureaucratic procedures before the church could officially open in August.

Officially, Turkey is strictly secular, but a large majority of Turks are Muslim, and Islam is closely tied up with the national identity. The national flag bears the Islamic star and crescent moon, and many feel non-Muslims are not real Turks.

The new church is simple, unadorned except for stained-glass windows, in a house converted for about $130,000 with help from donors in Britain, Spain, the United States and Indonesia.

Now two more Evangelical churches are applying for permission to register, one in Istanbul's Beşiktas district and another in the southeastern city of Diyarbakır.

Madrigal, a Catalan from a Catholic family who came to Turkey in 1985, says there are some 5,000 evangelical Christians in Turkey -- half of them Turks -- and he receives four or five enquiries each week.

But, in a country where missionaries have traditionally been viewed with suspicion, the group does not actively seek new members.

"(Proselytising) is seen badly in society ... The word missionary means spy," Madrigal said, adding that in 1987 he was arrested, and as policemen beat him they demanded to know which state he worked for.

There has been much progress since then, and Madrigal says the EU has played a large role, but his church still has unmet demands, such as being allowed to have a graveyard.

Madrigal, who says that what he has faced in Turkey has parallels with obstacles to change in Spain under dictator Francisco Franco, also looks forward to greater freedoms in Turkey as EU membership draws nearer.

"Turkey is changing its attitude slowly, from the realm of what is forbidden to one of what is permitted."

Several news articles in the Turkish press about the official recognition of our building (July 26, 2006). 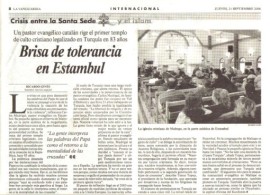 The news article contrasts the Pope's declarations about the spread of Islam through violence with the Turkish state's official recognition of the Istanbul Protestant Church as an official temple.

Other international press articles on the recognition of the Foundation as an official temple:﻿

﻿Article on the Foundation's 10th Anniversary

"Support from the Ministry of Religion to the first civilian church" 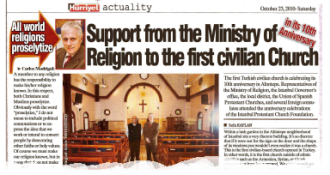 Read it in English by clicking on the picture

Translation of the article dated October 23, 2010 on occasion of the 10th anniversary of the Foundation in the Turkish newspaper named Hürriyet, one of the most important in  the country.﻿

The Foundation on TV

View some clips of various programs the Founding Pastor of IPCF has been invited﻿ to attend.

These are a tremendous opportunity not only to share the Good News of the Gospel, but to uproot the many prejudices that public opinion in Turkey has about the Christian faith.

At the same time is another means to provide a sense of belonging to the evangelical community in Turkish society.﻿