The Plan of Salvation

What is The Gospel?

The Gospel is the good news about salvation, the means God has designed for human beings to reach heaven.

This plan is illustrated in the chart below.

In all religions of human origin, salvation depends on a personal effort. The salvation Christ offers, however, is an unconditional gift from God. This is what makes the Gospel different from any other faith or ideology!﻿ 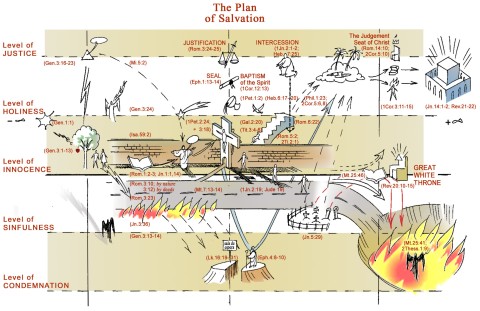 The Plan of Salvation chart

This chart is found in the book of the same title: The Plan of Salvation (only available in Turkish or Spanish)﻿.

The main story is that of two different paths: the broad and narrow. When the first man fell into sin, he lost his state of innocence. This created a "wall" of separation between God's holiness and the human being. The wide path corresponds to a life centered in this world and in selfishness, which leads us directly to the "lake of fire."

The narrow path leads to salvation. God, in eternity, decided to send his Son (the divine Word) to the world, as announced by the prophets. In accordance with this, Christ was born two thousand years ago, died for sin, and opened a gap in the "wall" that is impenetrable to man.

To pass through the narrow gate it is necessary for us to repent and turn to the Savior. Those who do so begin a new spiritual life, and with the strength given by the Lord, they move into a life of service and ascend the ladder of grace and holiness.

Different levels in the Plan

You may notice four horizontal lines in the chart. These represent the four levels in which the Plan of Salvation operates:

INNOCENCE: Absence of both sin and obedience in the original creation.

HOLINESS: Strength to do good which comes from a surrendered heart.

SINFULNESS: Choosing your own path instead of God's way (the wide road).

JUSTICE: The divine means that transforms punishment into forgiveness.

CONDEMNATION: The final destination for those who reject God's forgiveness.

God's purpose is to elevate us to the level of holiness, which make us partakers of all His righteousness, love, and goodness!