What does "Trinity" mean?

According to the Bible-based belief in the Trinity (Arabic: Tahtlith), Allah is one single God and being, and not three.

When Christians claim that “God is one and exists in three personal qualities (hypostasis),” they are not talking about three distinct beings, but rather are saying that “Allah is the one and only God, who exists in three essential and personal attributes since eternity” (essential attributes﻿: Arabic adh-as-sifat dhatiyya﻿)

Namely, these are His being (Arabic wujud), His word (Arabic kalam) and His power (Arabic qudra﻿), or: Father, Son, and Holy Spirit. These nouns do not express bodily states. This is comparable to when we say something like “he is the father of the idea.” Thus, God is the spiritual father of his word, not the biological father.﻿

“In the beginning God [His being] created the heaven and the earth.

And God said [His word], Let there be light: and there was light.”

God is one. His essential being (Arabic wujud), is one and the same indivisible being, forever and ever. This unicity of God in Arabic is called tauhid (unity).

His identity (Arabic dhat, selfness), however, is manifest on three “poles,” such as conscious Being, Word, and Power. This diversity within the divine unity in Arabic is called tathlith (triad).

How can God be one and three at the same time?﻿

(Excerpt from "Explaining the Trinity to Islam"﻿)

Now we will try to give an approximate explanation as to how three persons in the Divinity are mutually and uninterruptedly generated in eternity. As we have already seen, this fact does not have either a “before” nor an “after,” so it is therefore not a “creation” but a uninterrupted “generation.”

According to the theory of relativity, time does not exist at the speed of light. Using this concept of quantum physics we have an illustration of how the three persons of the Trinity can participate of a single substance. But we must not forget that with such illustrations we are neither comparing nor reducing the Divinity to the examples. The true purpose of any illustration is to show the viability and the logic of a spiritual reality. Invisible realities can be understood better thanks to visible examples that help us to visualize them.﻿

Let’s imagine three teacups, one of them is full, the other two are empty (fig. 1). We pour the tea from the first cup into the second (fig. 2) and then pour this one into the third (fig. 3). Then we pour the tea in the third cup back into the first one. The cups are thus being filled consecutively with the tea from one cup. Now let’s imagine that we accelerate the process. As speed increases in the transfer, the eye is less able to distinguish the separate movements, until the point arrives in which the three cups seem to be full at the same time (fig. 4).﻿ 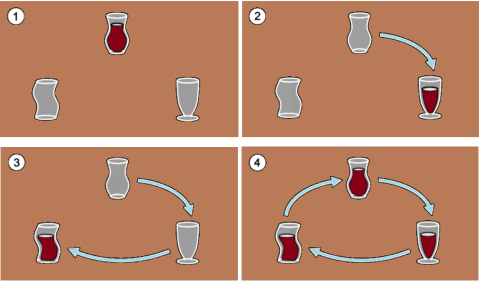 If we were able to ﻿exceed the speed of light, the limits of time would be surpassed (according to the theory of relativity). Therefore there would not be a "before" or an "after" filling, but a continuous "now" of fullness. Then the succession of emptying and filling would be left behind and the three cups would truly be filled with one single portion of tea! That is, instead of one full cup and two empty cups we would have three cups full of the tea from one of the cups!

Something like this occurs in the Trinity. The constant flow and filling of the divinity perpetuates in eternity (the absence of time). So God the Father pours his self into the Son and generates the way He exists. And in the same fashion both of them generate the way that the Spirit exists. Father, Son and Holy Spirit are full “at the same time” with a single being (the substance of the only God). And at the same time they subsist in three personal “molds,” that is, as three different personalities; like three different cups filled at the same time with the tea from only one cup. The same and single being who fills the divinity, at the same time adopts the different identities of Father, Son and Holy Spirit; just as the tea adopts the shape of the different cups that it fills. If we can imagine this scene, which occurs beyond the threshold of time, suddenly the Trinity becomes a tremendously logical and simple reality.