What does "Son of God" mean?

(Excerpts from "Explaining the Trinity to Islam"﻿)

In the Muslim world, preconceived ideas make it much more difficult to understand the figurative sense of the word “Son.” But we are talking about Ibnu'llah (اللهابْنُ, “spiritual son of,” “originally from God”), not about waladu'llah (اللهوَلدُ, “blood son of Allah”). And this isn’t in the biological sense…

According to Islamic scholars, before the word of God becomes formed in “sounds and letters” it exists in the form of an idea or outline (kalam nafsi) in God’s mind. This idea transforms into words, and thus comes forth as the Word of God. But this Word is not something distinct from God, even though it comes from him.

a)  Exactly how God put his spoken words (kalam lafzi - كلام لَفْظِي, pronounced word) in a book (Al-Kitabu’l-Mukaddes - ألْكِتَبُ ألْمُقَّدِس, the Holy Book), giving his words the form of letters and sounds (see picture below).

b)  In the same way, he put his living Word (kalam nafsi - كلام النفسي, essence of the word) in a human nature (‘Issa al-Masih - عيسى المسيح, Jesus the Christ), giving it body and personality.﻿ 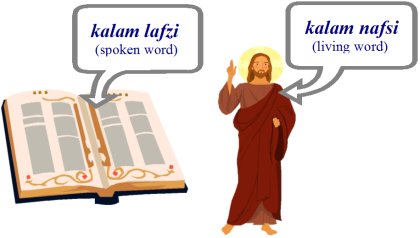 Islamic scholars at the beginning of the hijra affirmed that the “word of God” had not been created (makhluq: قولخم) but that it was eternal (’azali: يلزأ). Jesus is identified in the Qur’an as kalimatuhu minhu (“his word,” Al ‘Imran 3:44).

God created the world with his living Word: Allah says, “‘Be,’ and it is” (kun fayakunu: ُنوُكَيَف ْنُك; see Al-Baqarah 2:117). The commandment “be” (the divine fiat), is none other than the wisdom and creative power of God, the living manifestation of his will and of his science. It is the selfsame God! But how is this possible? It is evident from the fact that God does not create nor use only his will (simply willing it in his “inner being”), but he uses his Word. In the creative action, God did not use any instrument outside of his being or substance. He did not create with any outside help because he created from nothing! Where there was nothing, apart from the Creator, God was not going to use “something” outside of himself. The commandment “be” was not the created object but the Creator. Nor was it a “part” of God, because he is indivisible.

It is said of Jesus that he is “his Word,” that is, that the Word, indistinctly from the divine essence, came to the earth and made its dwelling in Jesus. According to a Turkish translation of the Qur’an, Jesus “is the incarnated word of God”—Jesus is “his Word” (Al ‘Imran 3:39). The fiat Word of God (kun: ْنُك, An-Nisa 4:171) became incarnated in Jesus when he was conceived in Mary’s womb. We are not saying that Jesus was created by the fiat as in the case of Adam, but that the fiat is the essence that was incarnated. Adam is the result of the fiat, while Jesus is the very fiat! It is the “be” of God (his Word) that shares his same essence. Therefore, the Kalam that indwells Jesus is the very nature of God!