What happened at Nicea? 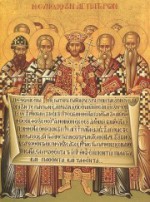 According to many Muslims, in the Council of Nicea (325 AD) four Gospels (Matthew, Mark, Luke and John) were selected from among hundreds of possible alternatives, and then the rest were burned, including the original one. This claim arises from the fact that according to the Koran, the New Testament prophesies the coming of Muhammad, but today these texts have "disappeared" from the Gospels. Therefore, they say the text has been corrupted, and the original is lost - or even worse - has been deliberately destroyed﻿.

However, according to the ﻿historical records of the Council of Nicea preserved to this day, the issues addressed in the Council were:

(As recorded by Eusebius of Caesarea - a supporter of Arius - and by Athanasius of Alexandria, a trinitarian.)

One and the same New Testament 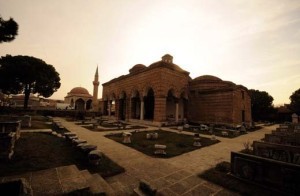 The church where the council met. Today a mosque.

The best answer to the claims of the Muslims is to say that this discussion, both by its supporters and its detractors, was based on one and the same New Testament, including the Gospels of Matthew, Mark, Luke and John. That is, the attenders of the Council never discussed any of the canonical books of the NT, but all defended their positions by relying on those same texts, fully known and accepted by the Universal Church for three centuries.﻿

The statement about the selection of four gospels at Nicea stems from a margin note in the Synodicon Ventus (SV), which by the ninth century collects the Councils decisions to date. According to the SV marginal note, "The Apocrypha was distinguished from the canonical books as follows: all of them were placed in the house of God on atlar, after which the bishops prayed that those texts which were inspired stay above, while the spurious down, and thus happened﻿" (SV, 887, vol.5, p.9).

This margin note was translated into French by Father Philippe Labbe in the seventeenth century (Conciles, vol.1, p.84, appendix) and collected by Voltaire in his Dictionary of Philosophy at the eighteenth﻿ century. Once the work was translated into English, Muslims started to claim that the original gospel had been destroyed at Nicea.

Some questions for Muslims